Four desktops, four laptops and three ipads. That’s for two kids (7 & 9) and one adult. Quite a lot of computing power and that’s not even including the servers and Raspberry Pi. Or the router. And wifi access point. And NAS.

So, there’s lot of tech in my house and when we are looking to ‘downsize’ for life in a tiny house, we need something… fit for purpose?

Let’s have one big computer, which runs all our Windows 10 gaming computers, performs file sharing and various other server duties.

With the COVID19 quarantine putting a delay on anything not vital for survival, it took a little to get the kit but eBay and CEX in the end came through, so here goes our list:

1x Intel i7 4770 CPU (to swap out the 4770K one already in the system; because it turns out K CPUs, while great for overclocking, are not working with VT-d virtualisation; something we need to pass-through the various graphics cards and other devices to the guest computers in KVM.

Several cables to plug in monitors and keyboard, mice and headsets (more than I thought in fact and I want to access the Linux (Pop_os) host machine too…). Remind me to share that cabling diagram with you:

Both RAID arrays are software RAID simply because there is no more room in the XL computer case. I have spare hardware card if anybody needs it.

We also have an on-board graphics card and 16GB of DDR3 RAM. Not really enough but I can’t justify the steep cost to upgrade to 32GB or even 64GB right now. Overall, that still works out at 4GB per W10 guest and 4GB left over for the host (which will run file and other servers besides the virtualisation hypervisor (KVM)).

And for the lulz we also upgraded the laptops with Linux and SSDs to act as not so thin clients for the rig while we are away from home (one day we’ll be free to travel again!) – thank you Parsec for an awesome, free way to remotely play at 60fps and even share with friends. If you haven’t tried it, head over to Parsec Gaming and download it. Currently supports Mac, Windows and Linux clients and Windows and Mac servers. Not quite ShadowTech but close enough for what we need. Kids are using it right now to play on their desktops while at their mum’s.

To sum up: we’ll use KVM on Linux to virtualise existing Windows 10 machines with dedicated cards each and virtual hard drives on two fast and redundant disk arrays, all with low-lag remote gaming access.

Let me know any questions or comments you have – love to hear your feedback. 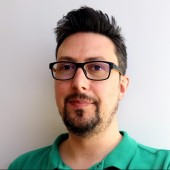 I am a digital project manager, entrepreneur and dad, and use this blog to share links and thoughts on a wider range of subjects, like privacy, climate change, science and politics.

Dipping my toe into fiverr.com or how I joined the gig economy

What do you think? Cancel reply

This site uses Akismet to reduce spam. Learn how your comment data is processed.